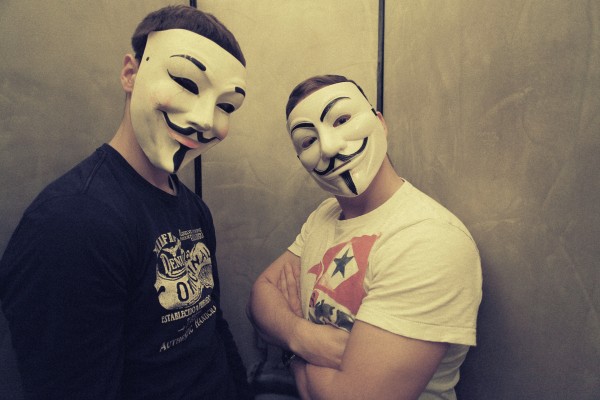 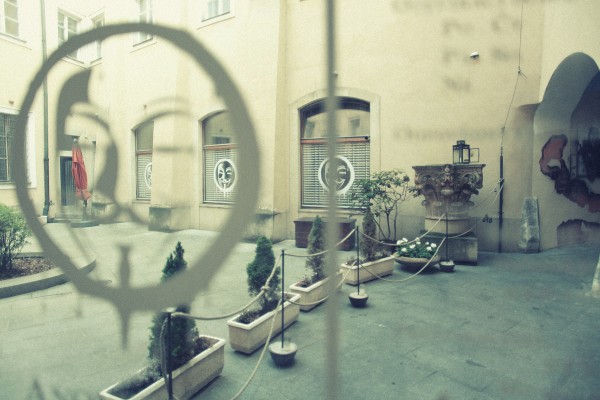 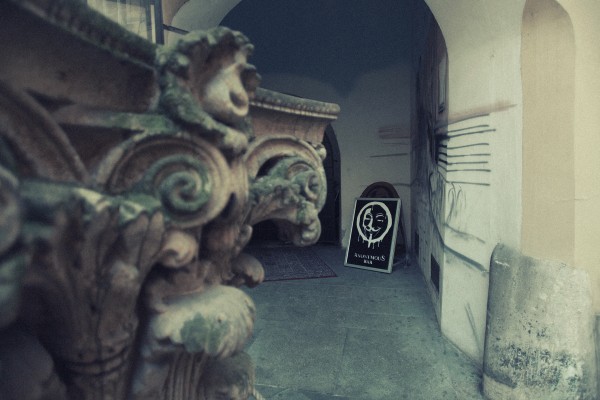 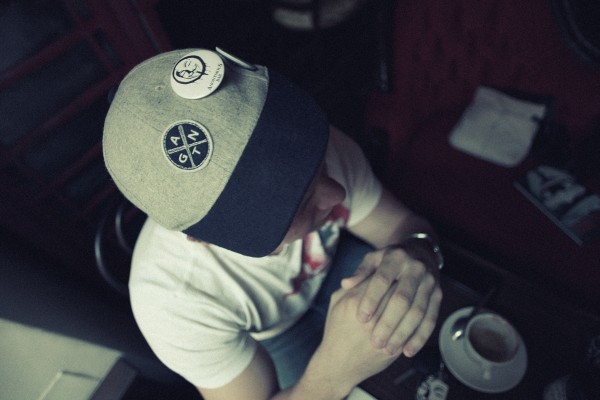 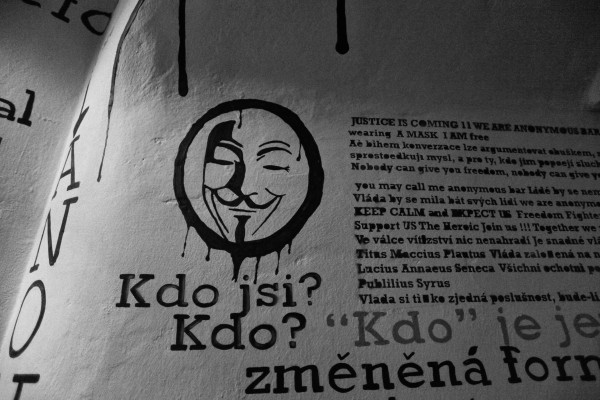 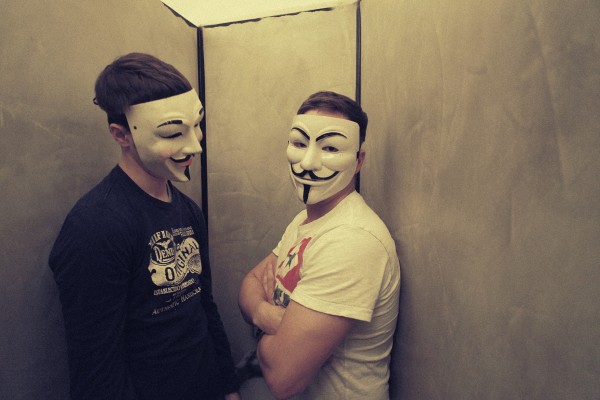 Anonymous… According to the Oxford dictionary is defined as something having no outstanding, individual, or unusual features; unremarkable and impersonal. Interesting, considering that Anonymous Bar in the centre of Prague’s old town appears to be nothing short of remarkable and outstanding. I’d like to say that I don’t love a good drink and I’m not out almost every night, but that would be a lie. I’ve seen a lot, and I’ve never seen anything like this, nor have I met two owners that are so driven to succeed and really create something original amongst an ocean of mainstream tourist traps. I sat down for a chat with the “Anonymous brothers / owners” to see what makes them tick and found that the bar is particularly loveable for these reasons…

1. The three souls of the bar.

The brothers took inspiration from three stories or ‘souls’ stretched out over the last 400 years. The first being the true story of anti-hero/terrorist Guy Fawkes’ infamous and spoiled attempt to blow up the houses of parliament in London on November the 5th, 1605. The second soul was created by Alan Moore who wrote the graphic novel V for Vendetta that adapted Fawkes’ face into the mask that many now recognise as being a symbol of revolution and rebellion. The novel was later adapted into a film of the same name starring Natalie Portman. And finally, the third and final belongs to the hacker activist group ‘Anonymous’ who have also used the mask to rebel and expose government data to the general public.

What was once an old horses stable has seen a great transformation over the years. The brothers have drawn inspiration from the 3 souls of the bar. All three can be seen clearly from the handmade furniture to famous and familiar paintings that have been airbrushed with the mask – everything has also been made and designed locally. The brothers have clearly spared no expense and have imprinted their vision and character upon every last brick. Even the toilets have the appearance of Evey’s (Portman) prison cell in the film.

Again drawn from inspiration of the 3 souls, each drink has been carefully crafted, selected and named. The brothers were kind enough to let Petr and I sample ‘V’s blood’ (named after V for Vendetta) – a blood bag labelled V+ filled with a homemade bitter infused with vermouth and raspberry tea which is then drizzled over a giant ice cube and mixed with brokers gin and campari – based on ‘negroni’, a cocktail made in Italy in 1919….incredible. The bartenders also bring a number of different qualities and entertainment to the hideout. As well as being trained as ‘mixologists’, they also bring charisma, dancing skills and some classy magic tricks.

Continue reading for a personal / anonymous interview with the brothers and to also see it all for yourself through Petr’s eyes and lenses. This is truly a spectacle that has to be seen by all. This kind of quality and originality is seldom seen in the Czech capital. 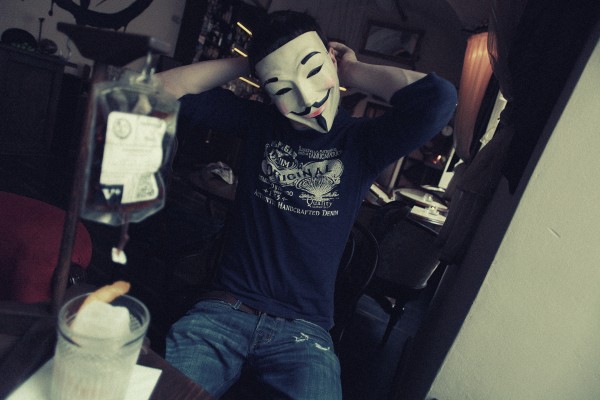 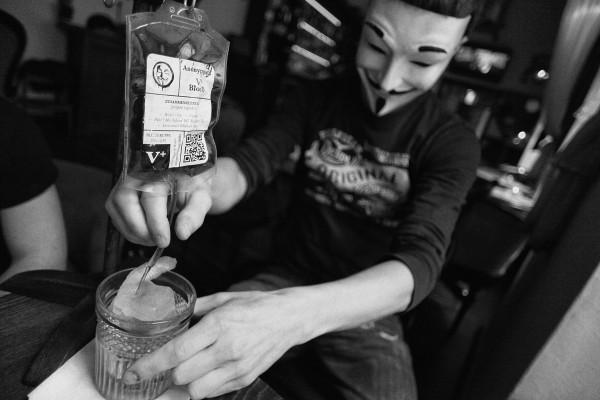 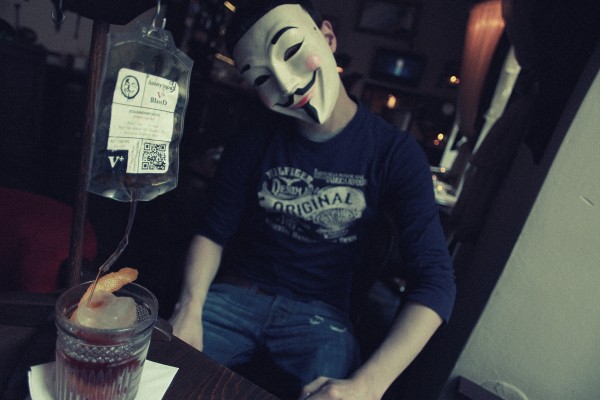 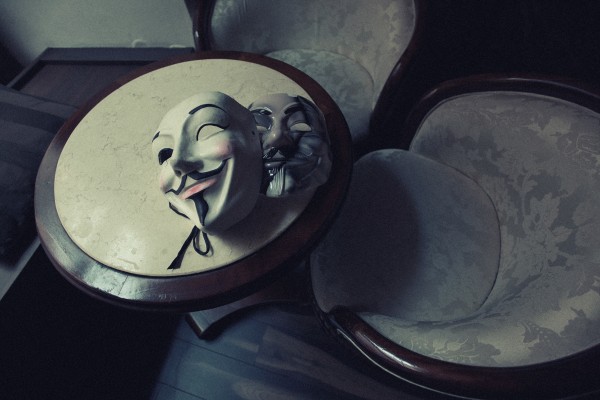 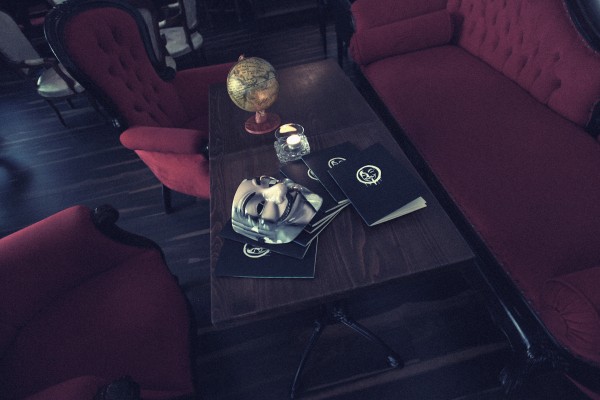 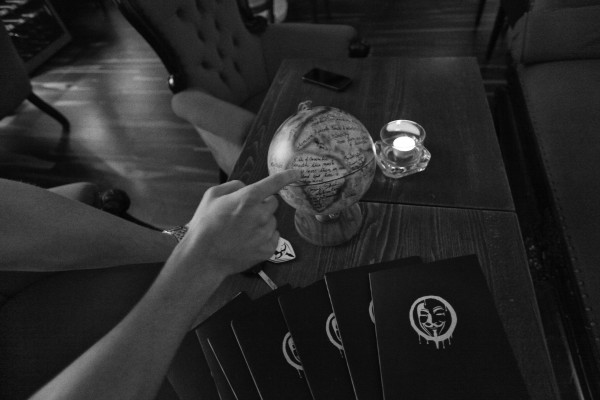 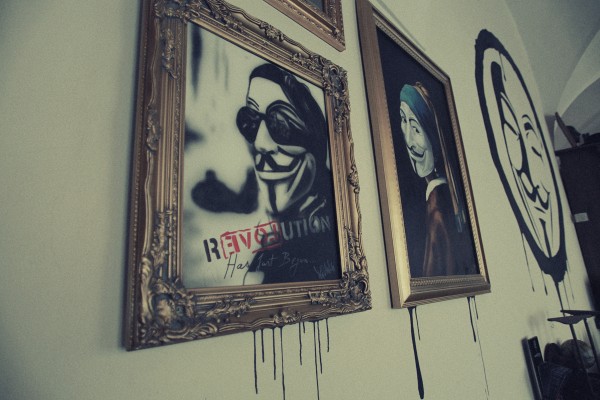 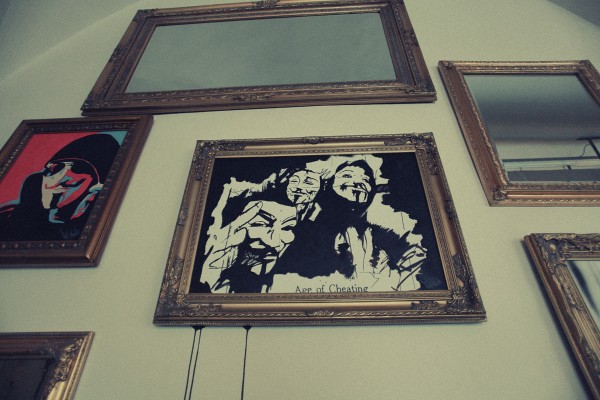 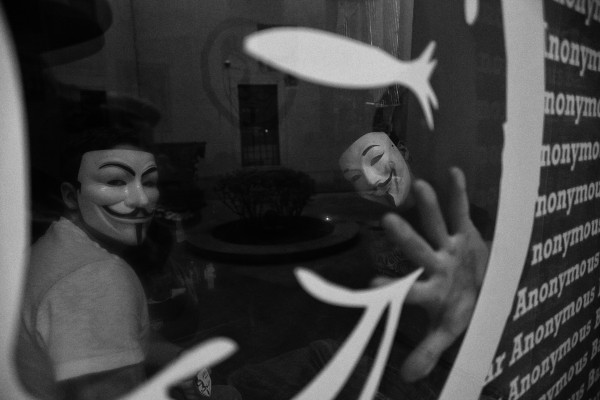 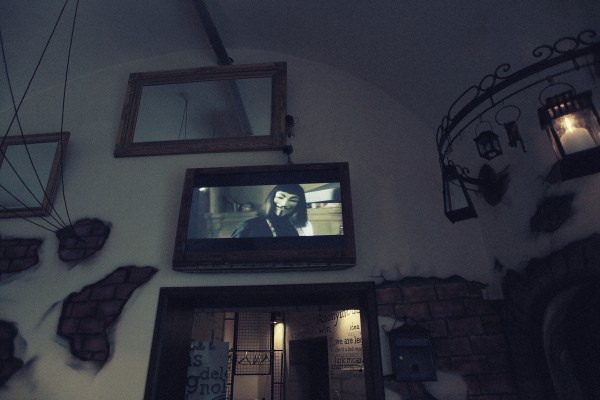 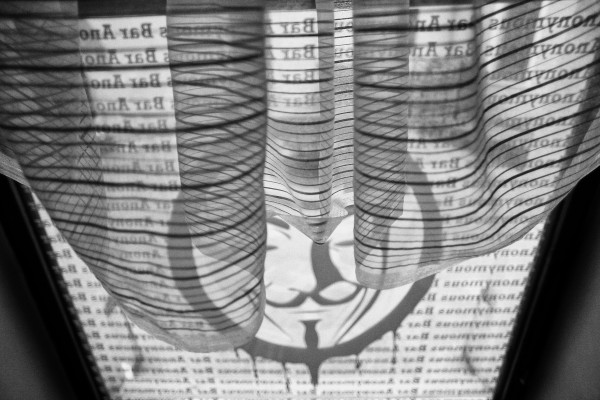 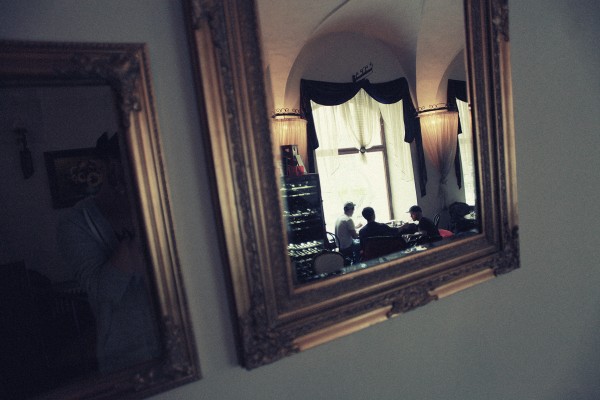 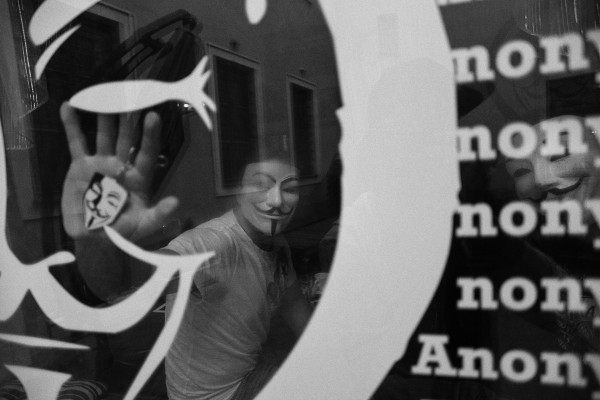 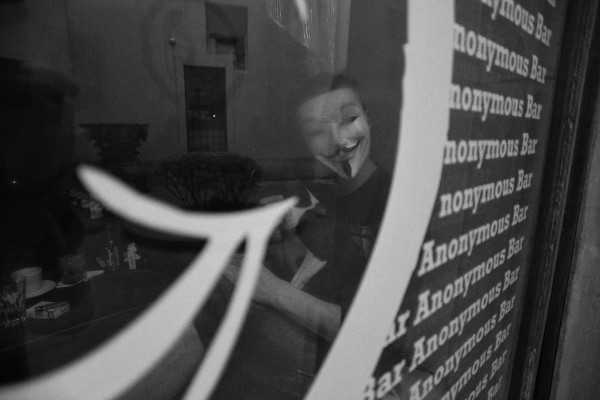 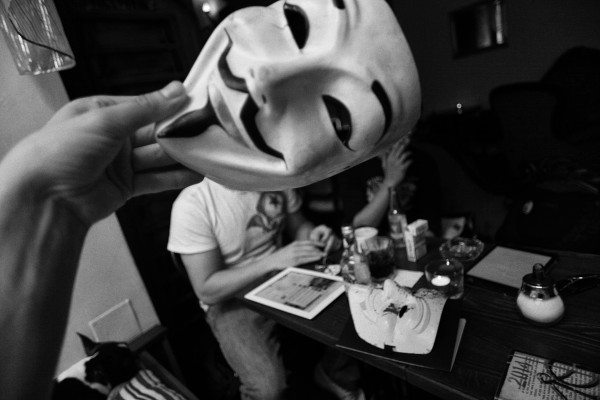 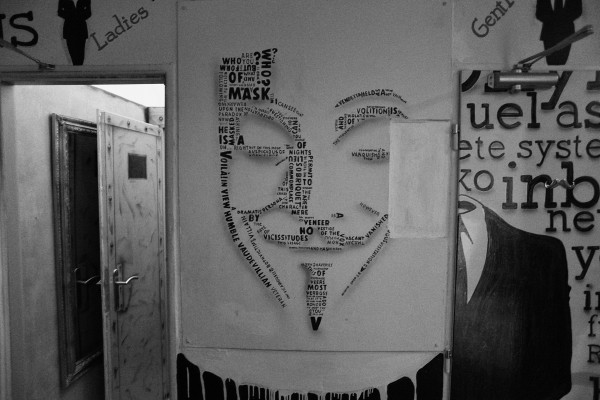 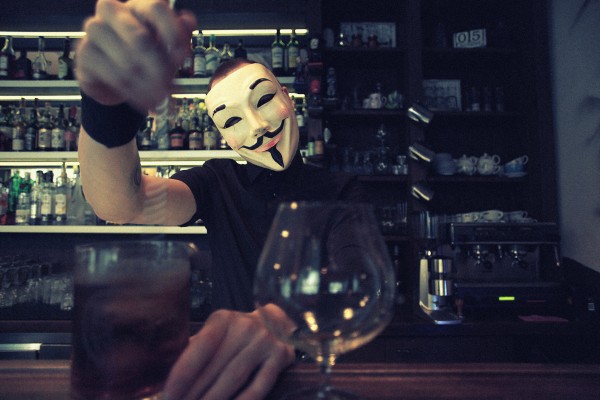 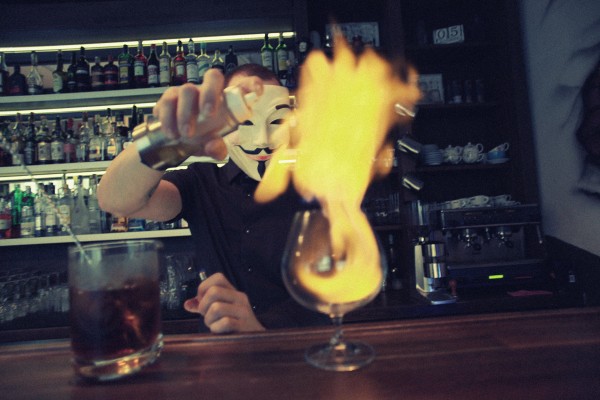 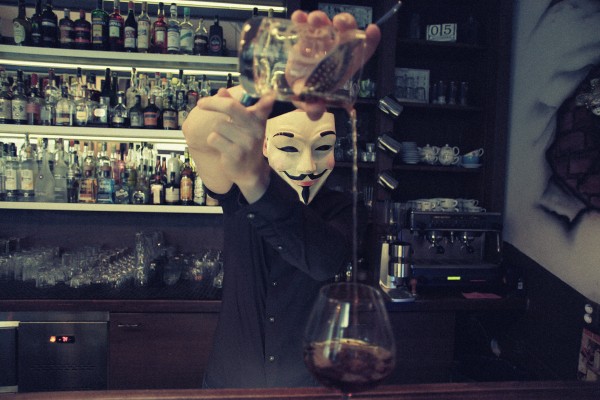 Where are you guys from originally? Are you from Prague?

Anonymous 2: Yes, we were born here in Prague in Vinohradské nemocnice.

So you live together?

Anonymous 1: Yes, we have a little house there and we live together because we can do a lot of work. It’s good.

Ok, so doesn’t it ever drive you crazy that you live AND work together?

A1: No, it’s ok (laughs) My brother is a bartender and plans the drinks and entertainment whereas I look after the numbers, the PR etc.

How is your bar more unique than others? I know that you pride yourself on your drinks, especially the cocktails.

A2: Everything is about how you speak to the customers. Everything starts at the main doors. You start a conversation with them and ask them about their favourite base for the drinks.. Do they like vodka, whiskey, gin? Most people, especially here in Prague, think that a cocktail is just about juice and syrup. We want to show people how you can make and play with spirits and herbs and all these things, you know?

Sounds great. And whose dream was it to open this bar?

A1: When we found this place we didn’t really know what we wanted from it, it started with my brother and his bar work.

A2: I used to wear the (Fawkes) mask while I worked. I travelled in Europe doing a bartender’s competition and this mask became my image.

And why this mask specifically? Is it because you want to remain anonymous? Are you in the hacker activist group?

A2: If we were, do you think we would tell you?

No (laughs). But it was worth a try anyway.

A1: A lot of people don’t know what this mask means. Some people know it from Anonymous, but not many know where it originally came from. And that’s what we want to do; we want to explain the history of this face and of course to talk about V for Vendetta and ‘Anonymous’.

A2: Before we were here it was a strip bar, a typical one.

A1: We changed everything.

A2: I knew the story behind the mask and I suggested it to my brother and thought hmm… that could be cool! So we put our ideas together and combined the three ‘souls’. Everything has a reason – it all started with this mask. V’s terrorist hideout was the reason for our interior design here. Every original bar must have a concept.

A1: We have similar ideas to the hacker group ‘Anonymous’. We don’t have any brands here. We don’t have a deal with Coca-Cola or Absolut vodka. Everything here is from us. We don’t like the mainstream. A lot of bars here have too many brands.

A2: We have a motto here. It doesn’t matter who you are or where you’re from. Come to our hideout and relax.

It looks a lot like the real hideout from the film. I think people are going to be impressed! Have you ever had any really intense fans that actually come in wearing the mask already? I’ll be honest.. I probably would.

A2: Not many, but some people from all over the world directly come with the mask and of course we give them a bit of a bonus because we love this.

Great. I’ll bring mine next time then!

A2: We have had some very interesting customers. But we won’t talk about them because everyone has the chance to remain anonymous here. We don’t collect emails or any personal contact information. You can organise reservations through Facebook, but that’s it.

Ok, now Guy Fawkes was seen as a bit of an anti-hero in English history. A terrorist, but also as a freedom fighter. After all, they celebrate this day every year by lighting bonfires in London. Do you think that the Czech Republic has a similar anti-hero in its history?

A1: Yes, maybe Jan Palach.. He burned himself in protest against the Russian occupation.

And what do you generally think about the hacker group? Do you support them? Are they active in Prague?

A2: We’re not going to tell you! (Laughs) On Facebook we get sent a lot of invitations to participate in events. They are actually raising awareness about plastic foreign objects in food in the US right now – we support them not by joining them, but in our own personal way.

What is your favourite cocktail?

A1: The Monkey 47 gin and tonic, it’s an old one from Germany. The gin is of a very high quality.

A2: And mine, 100%, is the New Orleans Fizz – gin, egg whites, fresh lemon, lime, sugar, vanilla, cream soda and orange flower water. The egg whites combine the flavours together. You must shake the drink for 10 minutes, which sometimes can take a while on a Friday (laughs). It’s originally from nineteenth century New Orleans. But, my favourite drink also depends on how I wake up in the morning.

And A2, what inspired you to get into mixology?

A2: It was all about studying and reading about it. And of course also trying everything behind the bar and experimenting.

What advice do you have for people planning to open their own bar?

A2: You must love it and you must find people who think the same way as you. Now in this age, it’s not easy to survive – so you need a lot of friends to help and support you, like we do. What you imagine in your head – put it in your hands.

Sounds cool. Now onto our People in Prague questions! How would you describe Prague?

A1: It’s crazy. Every night in Prague is crazy actually.

A2: And weird. I mean, everywhere here you can still smoke in restaurants. Czech Republic and Albania are the only countries left in Europe that are doing this.

A1: If I could choose I would like to see the Czech Republic in the 16th century or Prague in the 13th or 14th century. Or 16th century in London. I would love to see New York City during the financial crisis – Black Friday.

A2: In 1830, the godfather of bartending Jerry Thomas created all of these drink categories. I would like to have him here in the bar.

And Finally, for the silliest question… Do you think Natalie Portman has a bad English accent in V for Vendetta?

A2: There are always three teams of people; those who love it, those who hate it and those who don’t care. But for me, Natalie Portman promoted the film, she put the story out so I don’t care about her accent because she did a good job… and she’s very beautiful of course.

Written and transcribed by Ryan Keating. Photography by Petr Kurečka.