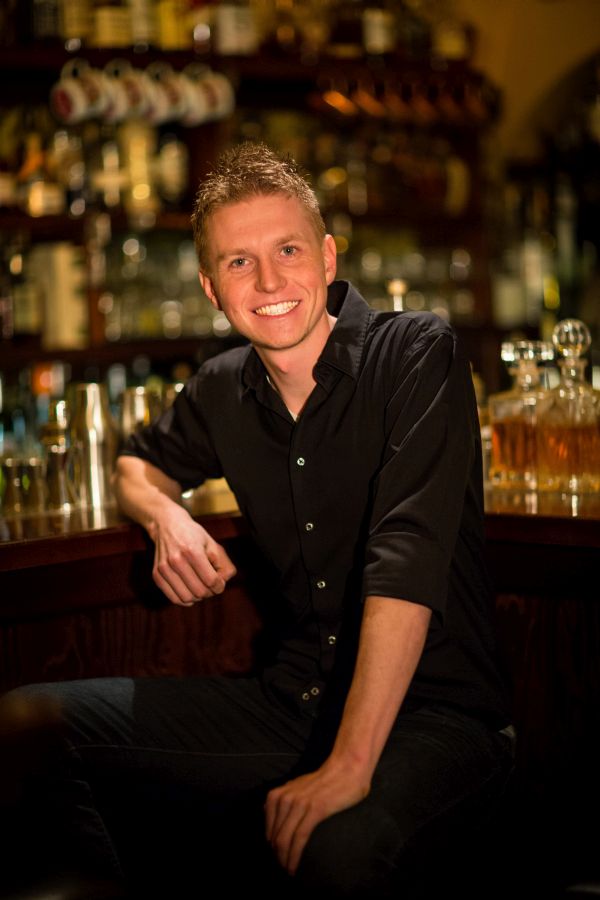 Ondra was recommended to me by a friend after I fell in love with the cocktail scene in Prague, it’s really something impressive and kind of measures the fast growth of Prague as a city for me. Every year there are new bars experimenting with new ambiance, drinks, and styles of service. We’ve already spoken to AnonymouS Bar as well as Hemingway, two of my favourites on the scene right now. But with Ondra being an award winning bartender, it was impossible to resist some tasty advice on where and what to drink in Prague. Ondra gives a special personal touch to all of the questions I threw at him. A very cool interview, check it out.

Where are you originally from?

I come from Prague, the wonderful city full of history.

What did you want to be when you were a kid?

Well, a garbageman at first as they have a huge car. Later it was a professional football player and a car mechanic. But in the end I have a job that fulfills me and I enjoy it. To communicate with people and come up with new creative cocktails? That’s definitely my cup of tea.

What was the first drink you ever had?

It’s been a very long ago but I remember it quite right, it was vodka and juice. And after that maybe a Cuba Libre…?

What was the last drink you had?

Hopefully I will have some more but the last so far was a Whiskey Sour. 🙂

What competitions have you competed in/won?

I’m not the kind of a bartender who would enter each and every competition up for grabs. The appeal of further possibilities and experience, that’s what draws me in. The first big competition for me was undoubtedly the ‘Jameson Bartenders Ball’. I managed to win the national finals twice. And then, at the world finals in Dublin, I came third. Some other wins include:

The Chivas Masters 2015 – Czech winner, 2nd at the world finals in New York 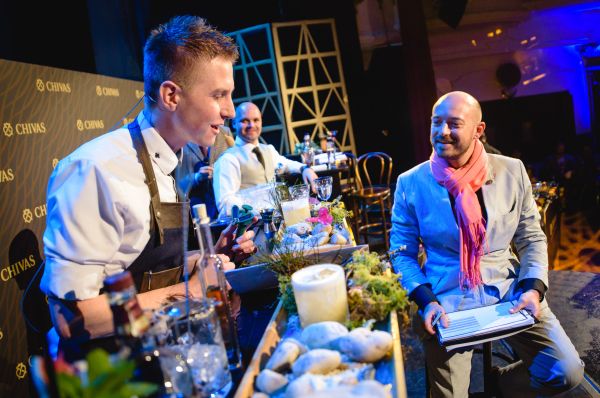 That’s an impressive list of wins! How would you describe Prague’s bar and cocktail scene? Where should we go for a cocktail?

Prague is a historical city and always will be (hopefully). There are many wonderful places that make your heart beating faster and make you come back again. The bar scene has grown in the past few years, not only in Prague but in the whole of the Czech Republic; there are new businesses open with huge potential to become some of the TOP places in the world. There’s also a wide range of bars, old as well as total newbies; everyone can find something they like, there’s such a variety. When it comes to bars – you can do the best in one evening. Hemingway bar, Bugsy´s, Cash Only, Black Angel´s, L´fleur, AnonymouS and La Casa de la Havana Vieja are only a fragment of what the city of Prague has to offer.

But it’s not only Prague that offers great bars. If you happen to be in Brno, don’t forget to visit Bar, který neexistuje (the bar that does not exist, in English) a Super Panda Circus, it would be a shame to miss it!

Do you have any advice for young bartenders or bar owners?

To be diligent, responsible and enthusiastic, that’s how you can be successful in this job.

How would you describe Prague in only a few words?

If you could go back in time and see anything, what would you choose to see?

I would definitely like to be a bartender in a bar during the prohibition in the US. The atmosphere and the
adrenalin that any minute a cop could come in and we would all be in a big mess.. this attracts me. And if I had another chance to go back in time, I would love to visit the beginning of the 90s when electronic music started to get popular. I would like to experience the atmosphere in the clubs and big parties of that time.

Well, Tom Cruise tried in Cocktail and failed 😀 Matthew McConaughey would be the right one. He may be a bit older and not as handsome as me but he’s the best choice. And if he’s too busy, then Adam Sandler, Ben Affleck or Jon Snow could be good candidates.

What’s your favourite word in English?

Together, massive or huge?

What’s your favourite word in Czech?

Thank you (děkuji) – I use this word each and every day. And I am always happy when I find that other people can use it, too. 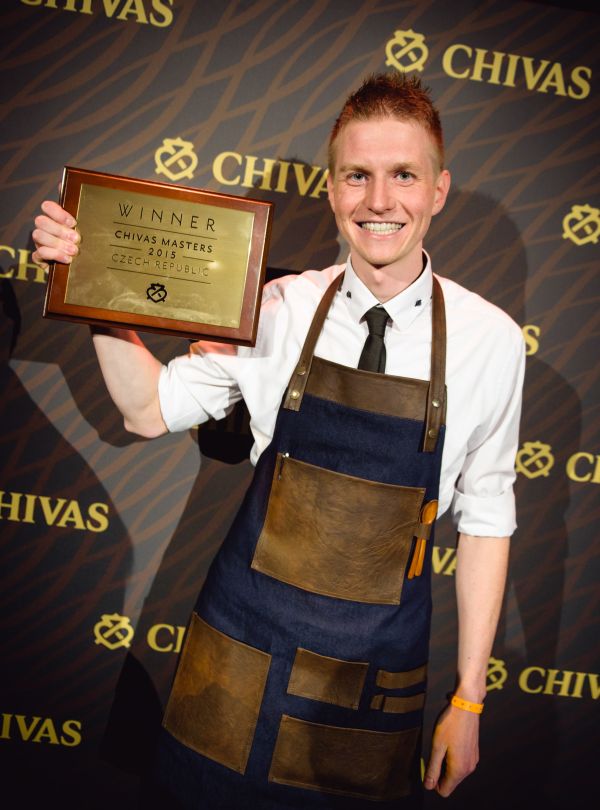 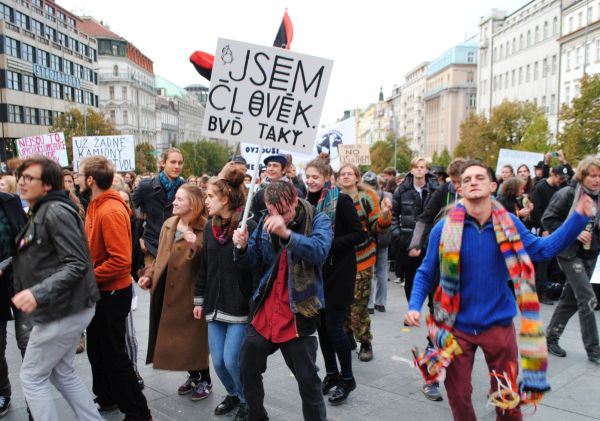 More protests on Wenceslas Square today in response to the ‘refugee crisis’ that is currently all over the media. The anti-Islam and anti-immigration protesters under the National Museum expressed their concerns through loud chants guided by chosen speakers on the museum balcony, while under the statue of St Wenceslas the pro-refugee crowd preferred to make an impact through motivational speeches and dance.

Both groups appeared to draw bigger crowds this time. The protesters then marched to Náměstí Míru where the event concluded. Check out some of the photos from Wenceslas Square below. 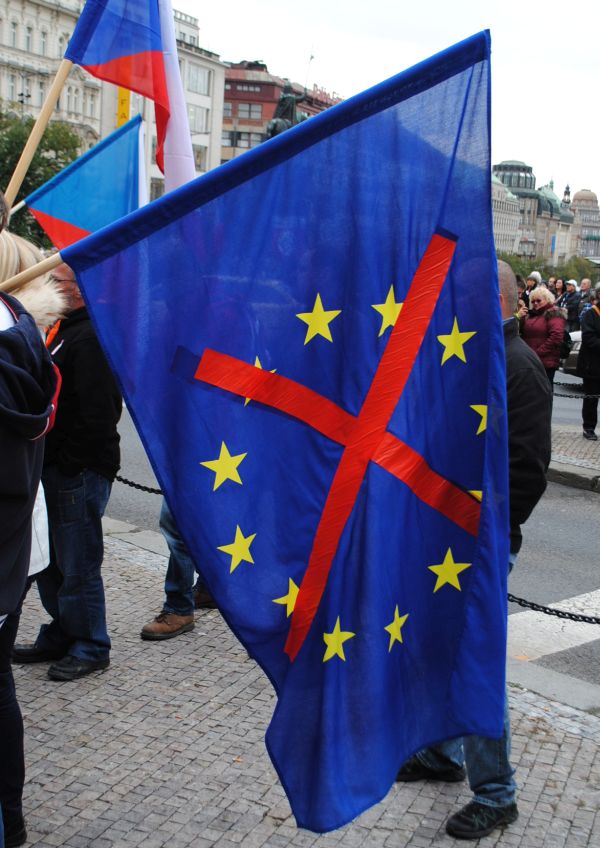 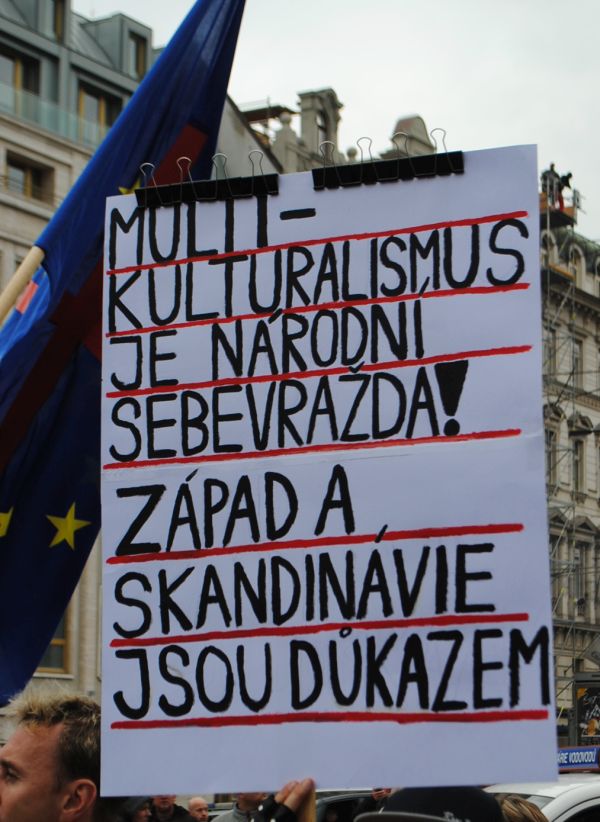 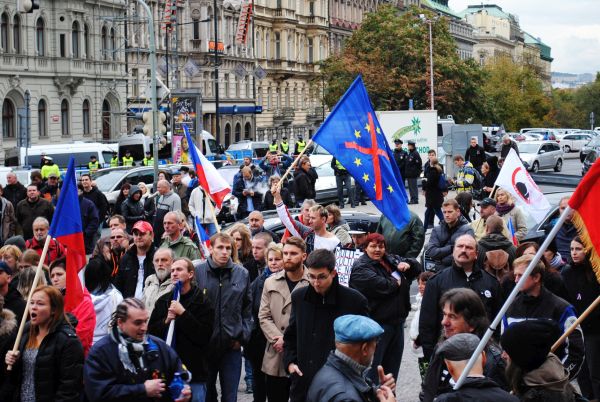 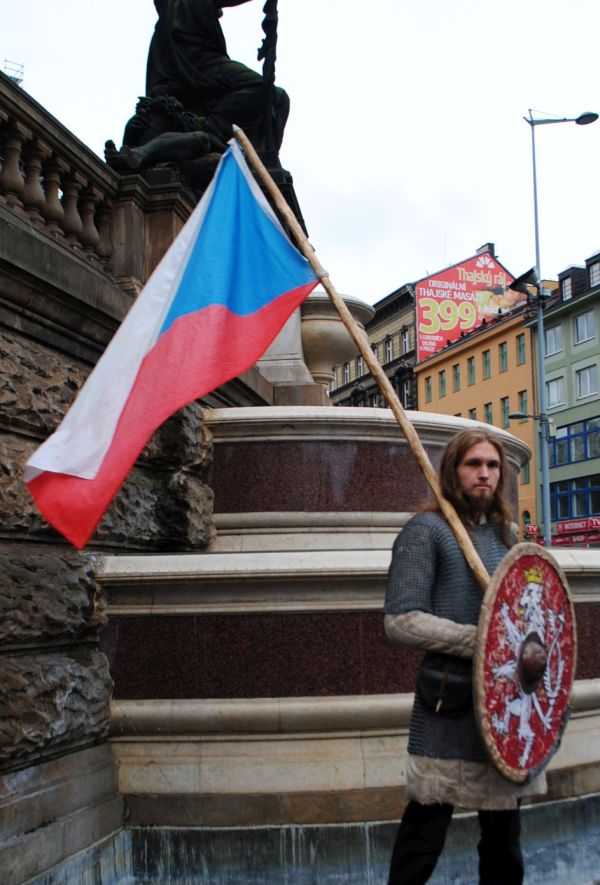 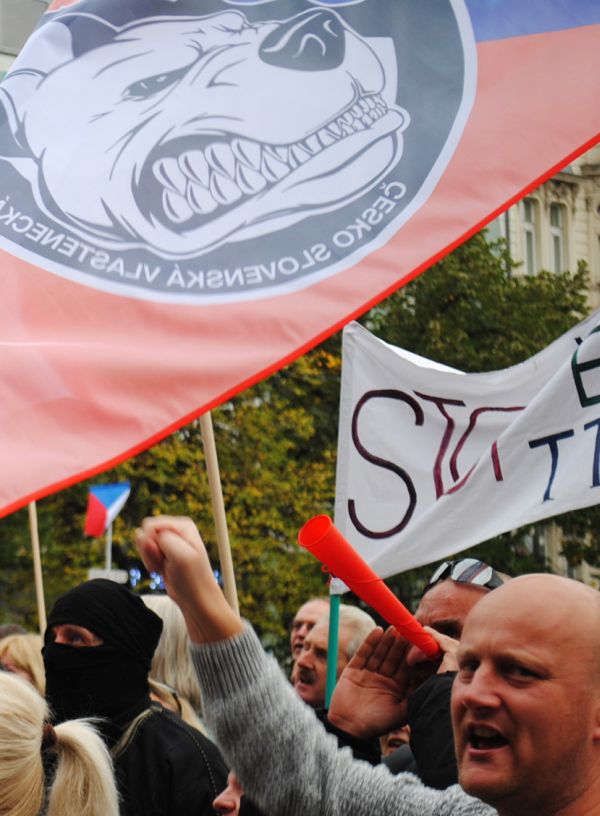 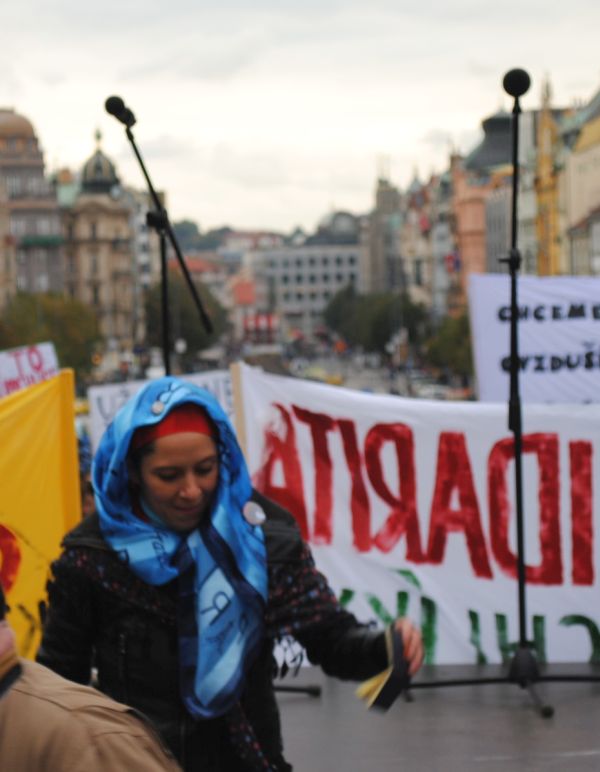 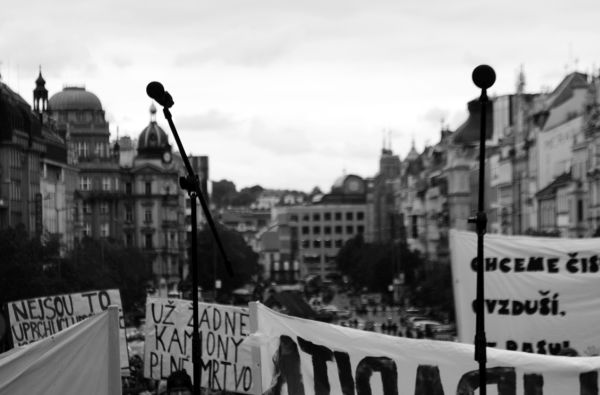 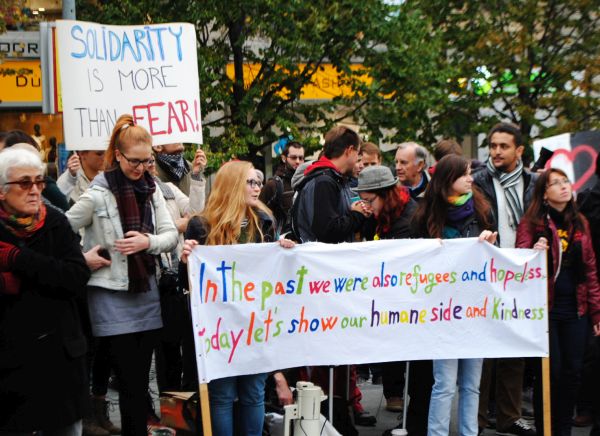 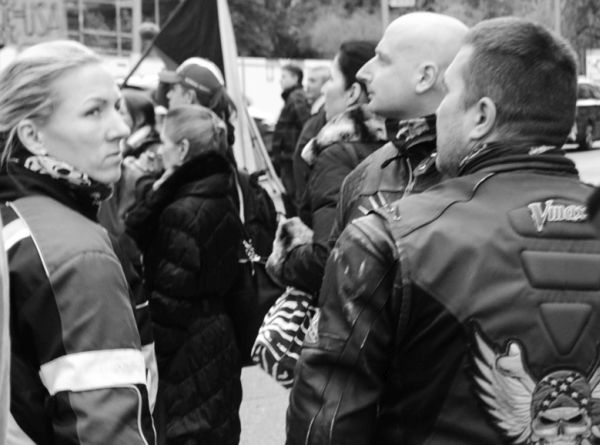 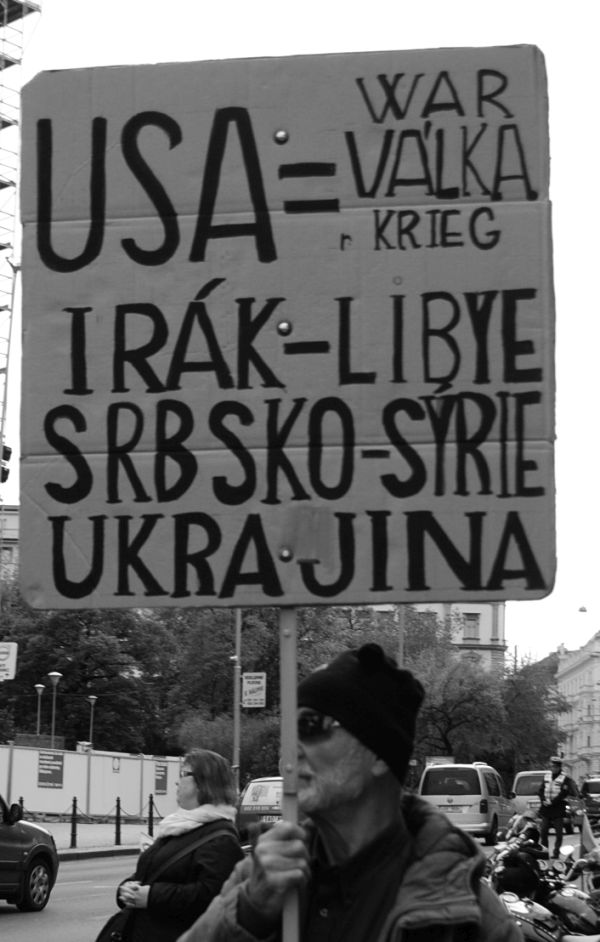 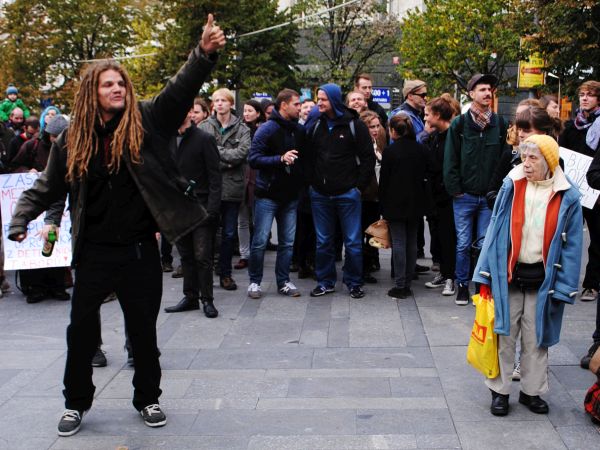 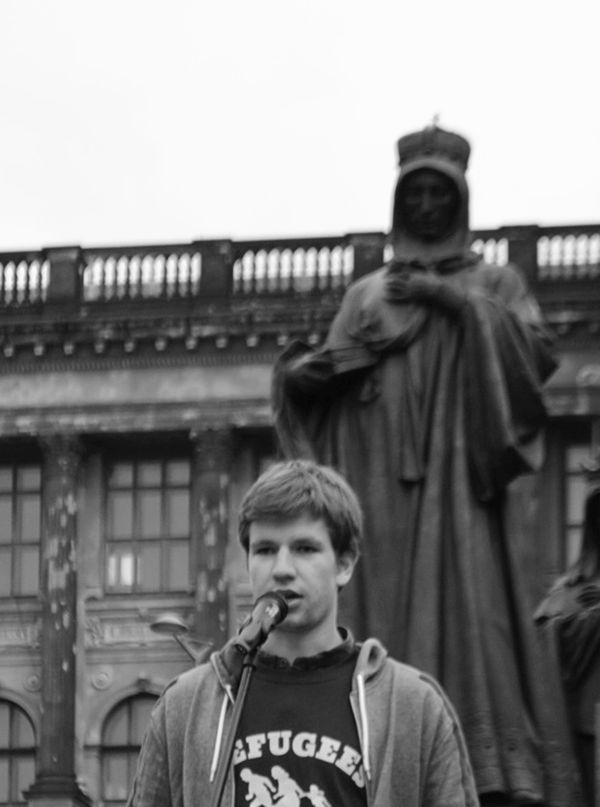 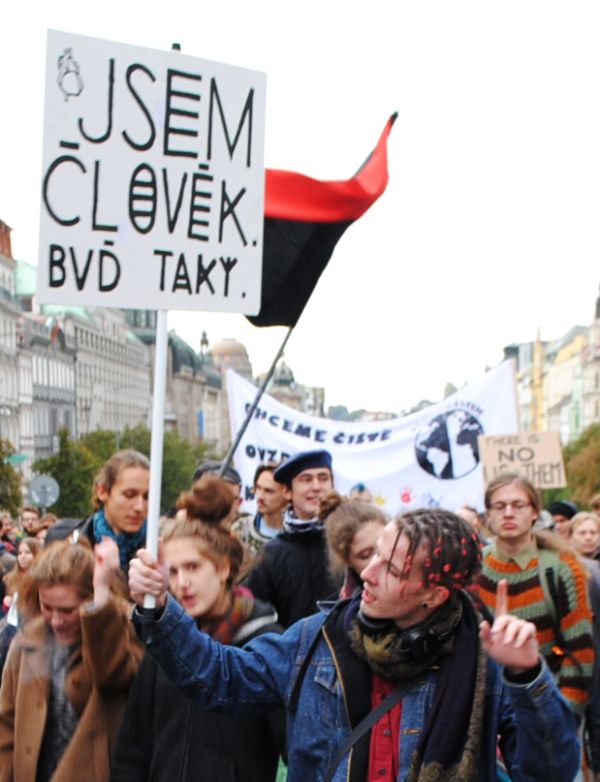 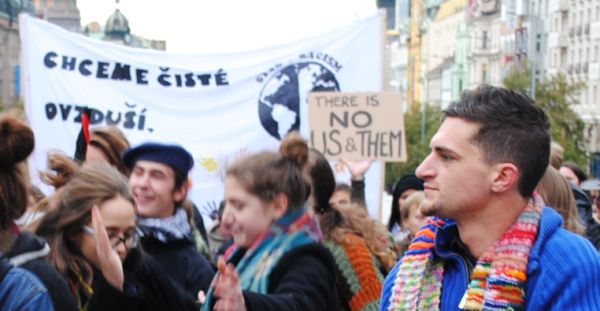