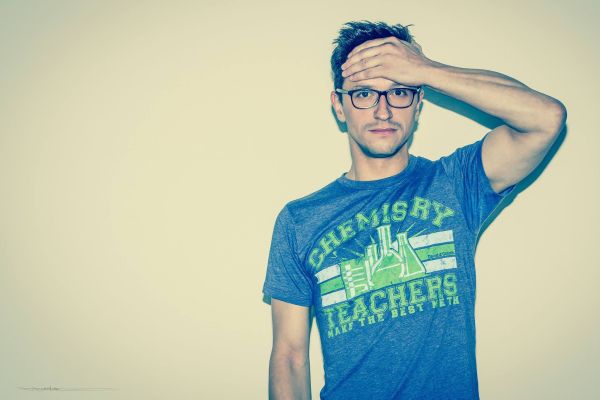 Petr Hájek is a name that some of you may know from the developing Czech art scene. As owner of the Chemistry Gallery, Petr has carefully crafted a superb gallery to showcase talented young Czech artists and their impressive work. We sat down in Café Louvre, a historical hub for creative Czechs of the past including writers Franz Kafka and Karel Čapek, for a chat about the birth of the Chemistry Gallery and Petr’s wide array of hidden talents that make for an inspiring tale.

Are you originally from Prague, Petr?

I was born in Olomouc, but I was living in Hranice na Moravě until I was six then my family moved to Prague. So Prague is my home.

Tell us a little about the Chemistry Gallery? How did it all begin?

Well, it’s kind of a funny story because I studied law here in Prague and before that I was actually playing football. So I used to play football, I used to be a lawyer and now I own an art gallery (laughs).

Yes, I played for Sparta. When I was studying at the faculty of law, I was also playing for Sparta’s B team. And when I finished my studies I knew that I could try to play football in the first and second league, but it seemed to me that it was time to do something else. So I started to work for Czech Invest. Then when the CEO at that time, Martin Jahn became the vice prime minister for economic affairs, he became a member of the government and offered me to join him, so I became the head of the business environment and legislation department. Our aim was to make sure new legislations never harmed business environments in the Czech Republic.

Then when he finished in the government, his team left the office and I started to think about what I really wanted to do. I had two ideas, one was to organize music concerts and the other was to open an art gallery – a street art gallery. At that time a lot of people were organising concerts so I thought it would be better to do a gallery. Suddenly, it became an idea that I couldn’t get rid of. So after three years of talking about it, I started to do something. At that time, I made friends with a photographer Martin Kamen and he was interested in something like this as well. So once we met and talked about it and I decided to make it a gallery for young artists. I thought that just a street art gallery in a Czech environment would be too narrow. We wanted to be something very different. For me at the time it seemed impossible to do it as I was working in PricewaterhouseCoopers, but Martin made it possible. So we opened in October 2008 in Vinohrady. At the beginning Martin was the art director while I was responsible for the operations and financing. After a year, he left so I took over the art directing. When he left I took it as an opportunity to open up to new curators and new ways of presenting art. It’s been going for 6 years now.

You’ve certainly done a lot, I’m not even sure what to ask you now! It’s very interesting that you went from football to art. Are there any similarities between them? Did one influence the other?

I’m always thankful that I played football. I loved it and started to travel with it. I also think when you play a collective sport it helps you to become a collective team member. This is always helpful when you’re working in a big company, or on your own. I still play football now but only with my friends. I have a team with classmates from my secondary school.

Did you want to be a football player when you were a child or were you interested in art?

My mother was a headmaster at a basic school and my father was a geologist so there wasn’t a lot of art about. When I was 6 I wanted to be a truck driver (laughs)…. I still don’t have a drivers license.

Me neither, driving isn’t for me.

What kind of art do you prefer?

More: Artist Pasta Oner on Warhol and the spirit of Prague

Why the ‘chemistry’ gallery?

There needs to be chemistry between the audience and the art, the same with the artist and the art they create.

I see, and why did you move to Holesovice?

Dejvice and Letná have always been my neighborhood. But we moved because I found a good space there. We started in Vinohrady which was an 80 square meter flat so you had to ring a bell to get in. At that time I was also interested in a nice renovated space in Konviktská Street (Nové Město). I knew the owner of the space and he kept telling me about another place in Kampa, but I thought there were a lot of strange galleries there and I didn’t want us to be like them. But eventually I went to see the space, and it was next to Charles Bridge and it was 240 square meters, approachable from the street. I decided that it doesn’t matter where the gallery is, but what’s inside. But after a year the rent increased and became too expensive so I found a space in the Orco building in Bubenská Street. Originally we were on the corner, then we moved to our current location. It’s bigger and better and we also have a dance studio downstairs so it’s not a typical gallery, because of this studio there are more people there to see the work. So it came to me by chance in the end. 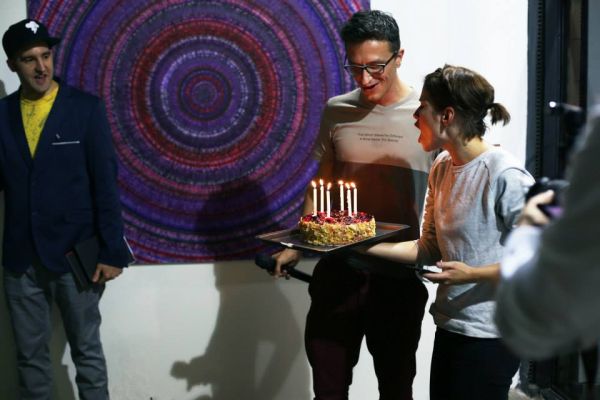 You’ve had some interesting events, how was the Andy Warhol New Year Eve’s party?

Well it was an ideal possibility to use our location as one big club. It was nice, there were about 400 people there after midnight. There were three dance shows because of the school, it’s great to be able to use them. We also had a reincarnated Andy Warhol – a performer dressed up like him and walked around the gallery. He also had an iPhone with a wireless video signal transmitted to the LCD displays. There was a pop art filter to make everything look topical. There were 6 DJs too.

How would you describe Prague?

The word I use the most when talking to foreigners is ‘blooming’, I think Prague is blooming and it will keep going for the next five years. This is something that you can’t see that much anymore in other cities like Paris for example. There are a lot of opportunities for cultural projects here now. When we started chemistry there were not many galleries, but since then there have been several galleries created, some of them focusing on young artists. It’s going to be an interesting time.

Well I’ve thought about this before and I would like to see three periods. The first is the period of Charles the 4th in Prague, then the pharaohs in Egypt and the Roman Empire before it went to hell.

I think I have to say Leonardo DiCaprio because I like him a lot. Maybe Paul Newman too, if he was still alive.

Where do you like to hang out in Prague?

As I said before, my main area was Dejvice and Letna, but now I live in Prague 1 and my favorite place is Bukanyr. I like Q cafe too because it’s run by my friends and it’s around the corner from where I live. I go where the good music is.

Favorite word? I think ‘báječně’. Whenever someone asks me how I am, I always say that. It means fabulous, great, wonderful etc.

Check out what’s going down at the Chemistry Gallery now, including the Tadeáš Kotrba exhibition which has now been extended until the 13th of March.

From March 24 – 29, the gallery will also exhibit works from the 14th International Contemporary Art Fair ART PRAGUE, an internationally reknowned event in the world of visual art.

Written and transcribed by Ryan Keating-Lambert. Photos from The Chemistry Gallery. Headline photo by Jakub Kajbin.